*More than 30 years of political drawing.

For thirty years, Theo Gootjes (1942) read all newspapers daily and sat down at his kitchen table in the evening after watching NOS News. There he dipped his pen in black ink and drew his comments on the most important news.

The following day his political drawing was printed in the evening newspaper. With that he made a huge audience pause for thought. Stedelijk Museum Schiedam honours his work with this solo exhibition Theo Gootjes. Always black-white.

As a chronicler of his time, Theo Gootjes drew about the envoirment, privacy, refugee policy, Europe and the separation of Great-Brittan. It is remarkable how current his work is; Gootjes made the prints between 1970 and 2005. He explains why. “My work is about the human deficiency. Vice is of all times. ”

In addition to political prints, the exhibition contains free work: handwritten and drawn pages from his Gootjesbijbel. These are also objects, three-dimensional version of drawings. Gootjes’ political work appeared amongst others in Vrije Volk and Rotterdams Dagblad. He lives in Schiedam.

A painter builds his work by putting colour next to colour, Gootjes starts with one line. In the course of his career, he used less and less lines. His drawing Uitgeproduceerd (2005) has three lines. Two of them together form a path that leads to a figure in the distance. This is his favourite work. ‘’There is almost nothing, yet it says everything.’’ 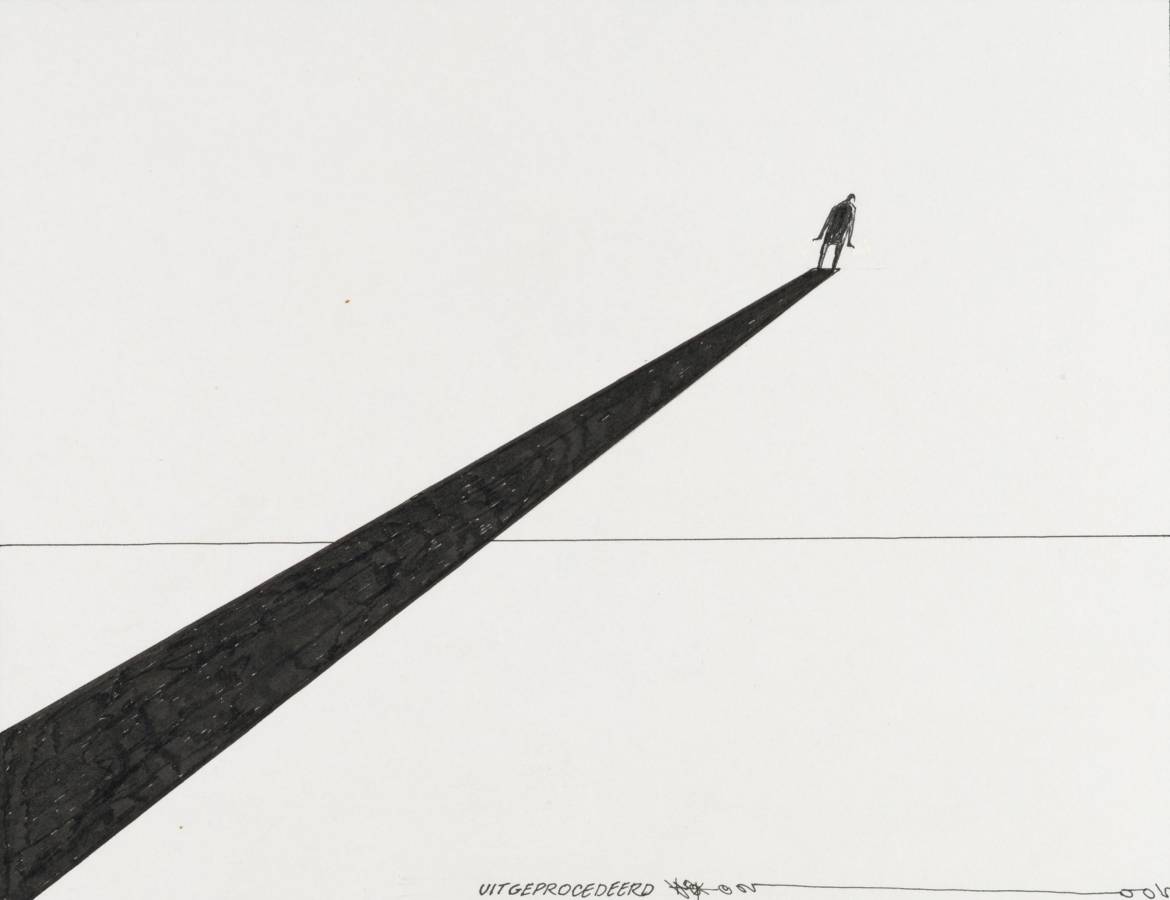 The subtitle of the exhibition Always black-white doesn’t only refer to the lack of colour in his work. It also refers to Gootjes’ opinion, always clearly present. A middle ground doesn’t work, he says. ‘’Your position must be clear at once. I agreed or disagreed.’’

Yet his signed commentary was sometimes used incorrectly or better: abused. One of his drawings that warned people about the rise of fascism, was used as propaganda from the extreme rights. Gootjes: “Reality caught up with satire, it’s a dangerous business.”

Gootjes grew up with Cristian faith and attended a seminar on a blue Monday. He would never made political prints without that upbringing. The Catholic tradition brought him his moralism; the finger with the message ‘’you have been warned’’. It also taught him to put his talent at the service of society. 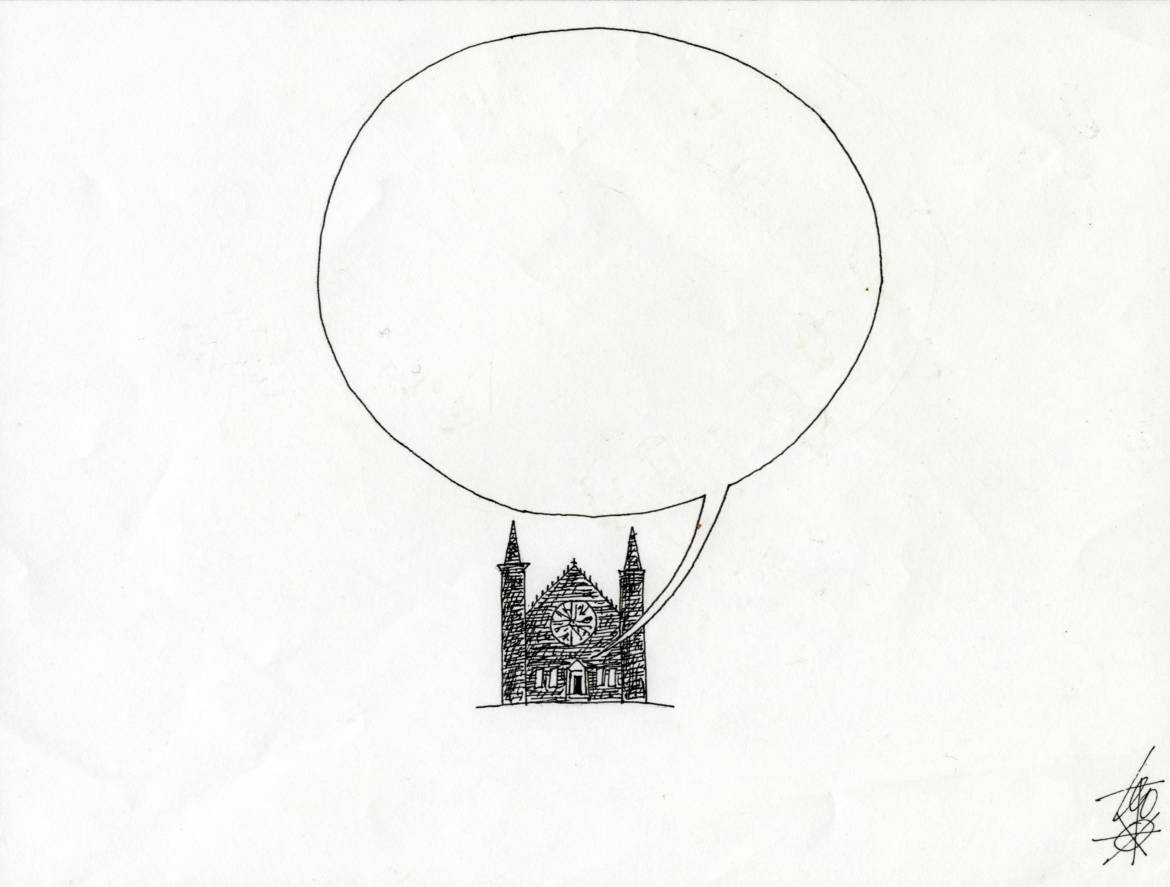 As a free artist, he immersed himself in the book of books for half a year from 1995. In a small, precise manuscript he copied page after page from the Song of Songs, the New Testament and the Apocalypse. He brightened up every chapter with an illustration. That led to his Gootjesbijbel.

He shows the humanity of the stories in particular the inability to expose them so mercilessly in his political prints. Fifteen of the hundred and fifty panels can be seen in the museum. The work is from the collection of the Koninklijke Bibliotheek. Gootjes placed four thousand political drawings in the Atlas van Stolk collection.

A drawing is only a political print when it is published, according to Gootjes. So what did he do after the editors refused a drawing of Jesus spitting the former Prime Minister Balkenende? He offered it again on the day that an unsuspecting intern took over the honors. The print still appeared in the newspaper and earned him a reprimand from the editorial staff.

Also in the category memorable is the time the newspaper apologized on the front page to the readers for a drawing the day before. The word Shell was written on the offending print, a corpse dangled from each letter. It was Gootjes’ comment on Shell’s involvement in the 1991 killings in Nigeria. In 2017, Amnesty International confirmed that the oil company was involved.

The fact that publishing a political print is not without consequences is proven by the Danish cartoon riot, they pictured the prophet Mohammed. Or the attack on the satirical weekly Charlie Hebdo in Paris in 2015. In 2019, The New York Times stopped publishing political cartoons. The reason was a print that, according to the Jewish community and later the newspaper, would be anti-Semitic. Gootjes views the development with dismay. “People are going to engage in self-censorship, that is a dangerous trend.”

Thanks are due to