What is realism now? In the 19th century, the concept caused a revolution. Realistic painters took a look around and painted it on their canvas. That sometimes raw reality was ‘to true’ and not ‘beautiful’ for art lovers and professionals.

About 150 years later, realistic art is no longer revolutionary. What is the situation now? And especially: what does the Netherlands look like? The exhibition Realism now ath Stedelijk Museum Schiedam provides an update with paintings from 2000: lovely work from Nico Heilijgers, raw paintings by Erik Suidman and silent art by Robin Speijer.

About 150 years later, realistic art is no longer revolutionary. What is the situation now? And especially: what does the Netherlands look like? The exhibition Realism now ath Stedelijk Museum Schiedam provides an update with paintings from 2000: lovely work from Nico Heilijgers, raw paintings by Erik Suidman and silent art by Robin Speijer.

A common denominator of every work of art in the exhibition is that it has sprung from reality. What you see is very recognizable yet unrecognizable. ‘The special thing is when you look through the artists eyes, you have a different look on reality around you.’ Says guest curator Trudi van Zadelhoff. At the same time she shows how lively realism is. ‘The exhibition explores the boundaries with poems, images and paintings. It shows the power of contemporary realistic art.’ Van Zadelhoff previously made the successful exhibition Masterly Women for the museum.

There’s work by Dutch contemporary artist, including Koen Vermeile, Maria Roosen and Jan Muskee. Each one shows the label realism in their own way. Perhaps revolutionary is that the exhibition shows work from Daan van Golden, Jan Schoonhoven e Peter Struycken. Realism and abstraction: is that possible together? For sure! An artist doesn’t think in boxer either.

Schoonhoven found his subjects on the streets in Delft, in visible reality. Conversely, a realistic fine painter sometimes also sees the world in abstract patterns and compositions. He or she thinks about surface distribution, colour and balance. Roland Schimmel started with landscapes. Currently there is a movie playing about him, which is about after-images: what do you really see?

Relation between realism and abstraction

To present the relationship between abstraction and realism you can see Erik Rijssemus’s Marie Antoinette Herhoofd next to Bob Bonies’s abstract painting. Qué Calor! By Nico Heilijgers a painting of a couple is seen next to Daan van Golden’s yellow square. In this room you can look for similarities in shape, colour and composition.

Abstraction is one part of the exhibition. Realism now also meanders along other themes: stillness, engagement, stories and portraits. Robin Speijer zooms in on pieces of textile. She lets you wander through the fabric’s fibers. The self-portraits of Eline Peek and Erik Suidman are raw and emotional. Is it real or more than real?

Esiri Erherienne-Essi’s portrait, nominated for the Prix de Rome 2019, is very down-to-earth and recognizable, just like the sculpted portraits of Efrat Zehavi. Sometimes things that seem very real can hurt the most. You may get this feeling when you look at Paul de Reus’s human-height image. Lichtje (Little Light) (Abdelhaknouri) refers to the Ajax football player who had a cardiac arrest in 2017 during a football match. Since then he has been in a coma.

In the hall where engagement is the main theme, Peter Koole reflects on the events surrounding Srebrenica, a town in Eastern Bosnia. “On July 11, 1995, Srebrenica fell. In the following week, the largest genocide in Europe after the Second World War took place. Koole: “Men and women were separated around the Dutchbat compound, the men were executed. In the forests and on the mountains a massacre took place on a large column of men trying to escape.”

In the last hall the artworks are bout our daily life and stories. The scenes look like snapshots, accidental snapshots of everyday moments. Till you take a better look. You will see something that just happened or is about to happen. Jurre Blom paints these real images, authentic moments, which he calls in-between moments. What are you actually looking at? Why are those three pairs of shoes neatly arranged in a row at that place in that room? Who flees through the door? And why? 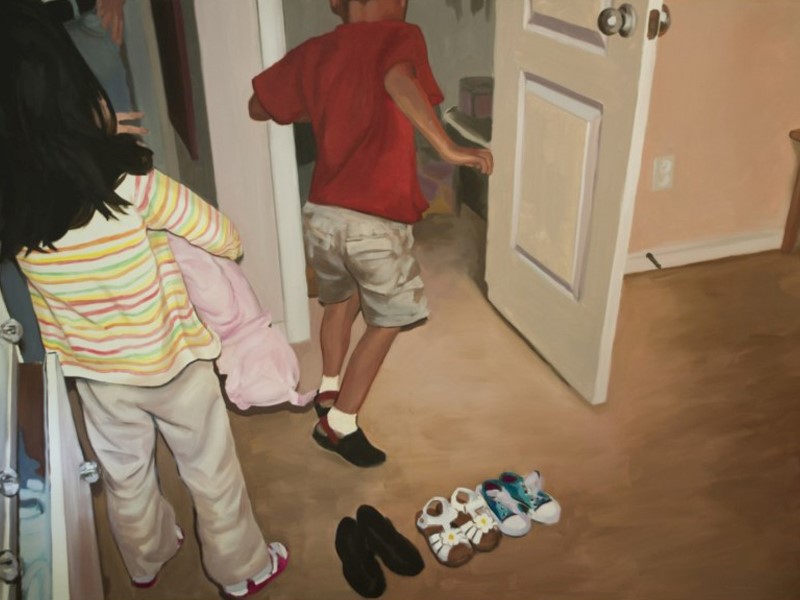 Ischa Kempka adapted her title especially for the exhibition. Her sculpture of a human finger is now called: Trudi thought this work was named ‘Fuck’. But it is actually the finger you desire most. ‘The artist works a lot with texts, which means the title has also become a work of art,’ says curator Trudi van Zadelhoff.

Thanks are due to: