Did you know that Schiedam was founded by Aleida, a strong single woman? And that the city keys made for Emperor Napoleon are still here?

In Panorama Schiedam, the Stedelijk Museum Schiedam tells stories of the city, from hard workers, dreamers and adventurers to heroes, strategists and survivors. You can see the very first house, windmills and blocks of flats, and get to know the Kethel horse that’s over 2,000 years old. The exhibition is for everyone, young and old, and opened on Saturday 14 May 2022 with the festive reopening of the building after being closed for 18 months of renovations. Panorama Schiedam is the first semi-permanent history exhibition in the museum and in the city.

Smile
‘Panorama Schiedam offers a glimpse into the Schiedam of old,’ says museum director Anne de Haij. ‘You can see the stories of Schiedammers from all over the world who together made the city and the Netherlands what it is today.’ City history curator Merel van der Vaart adds, ‘We wanted to focus attention on stories about Schiedam that are sometimes underexposed, but which many people today will recognise themselves in. Step into an imaginative miniature world and see houses with atmospherically lit windows – hear people talking, laughing, and you can literally stand in the middle of it. You can even walk on water.’

Water
Together with history experts from Schiedam, the museum chose 10 stories that are important for the city and often also for the broader history of the Netherlands. Water plays an important role: the trekvaart, an old public transport system, moves people to the city, sometimes from nearby, and sometimes on ships that have sailed the oceans. At high tide, the river Maas causes flooding in the pre-war De Gorzen area, where people shutter their windows and doors to protect their homes.

Wünderkammer
The exhibition is designed as a performance with Schiedammers in the lead as well as supporting roles. Marloes van der Hoek and Wikke van Houwelingen, artists who usually design theatre sets, collaborated on the design alongside light and sound designers, prop- and model makers. ‘For Schiedammers it will hopefully be a familiar landscape, but people from outside the city will also recognise themselves,’ says Van der Hoek, who compares the panorama with a wünderkammer with treasures large and small. Van Houwelingen adds, ‘You can see the vitality of people – every setback is transformed into action.’ 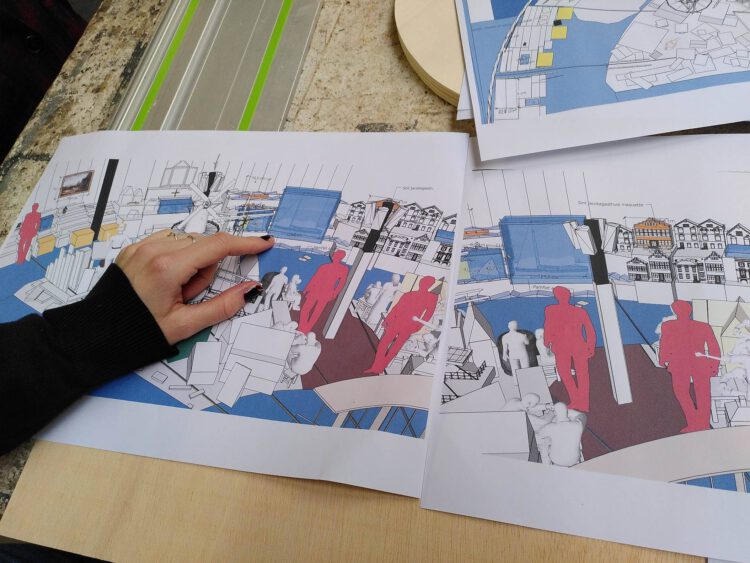 Teetge
Entering the exhibition, you first see ’the most beautiful view over the city’. As you walk through history your journey begins some 2,000 years ago when the country is part of the Roman Empire. Centuries pass by as you walk on and you get to know Teetge, born around 1600. She’s the innkeeper who helps young men get a contract with the Dutch East India Company in exchange for a part of their wages.

Slavery
Learn about the plantations of Suriname and the role Schiedammers played in slavery in the Dutch colony. You can also meet Cornelis Stout who sets sail with his family to work in Suriname as a cooper (or barrel maker) but is hijacked by pirates and sold into slavery. After a rescue operation by Schiedammers, the Stout family are bought free and returned.

First female councillor
In the 19th and 20th centuries, Schiedam is dominated by the genever industry, with many Schiedammers working in distilleries, malt houses or in the glass factory. Elisabeth Koeten-Ooms takes part in protests and hunger marches, eventually becoming the first woman in the Netherlands to be elected to the town council in 1919. The last stories are about the neighbourhoods of De Gorzen, Nieuwland and Groenoord and what it’s like to live there in the last half of the 20th century. The panorama ends with visitors’ contributions: that’s where tomorrow’s history begins.

With thanks to
Gemeente Schiedam, VriendenLoterij, Province of Zuid-Holland, Prins Bernhard Cultuurfonds

This website uses cookies to improve your experience while you navigate through the website. Out of these, the cookies that are categorized as necessary are stored on your browser as they are essential for the working of basic functionalities of the website. We also use third-party cookies that help us analyze and understand how you use this website. These cookies will be stored in your browser only with your consent. You also have the option to opt-out of these cookies. But opting out of some of these cookies may affect your browsing experience.
Necessary Altijd ingeschakeld
Necessary cookies are absolutely essential for the website to function properly. These cookies ensure basic functionalities and security features of the website, anonymously.
Functional
Functional cookies help to perform certain functionalities like sharing the content of the website on social media platforms, collect feedbacks, and other third-party features.
Performance
Performance cookies are used to understand and analyze the key performance indexes of the website which helps in delivering a better user experience for the visitors.
Analytics
Analytical cookies are used to understand how visitors interact with the website. These cookies help provide information on metrics the number of visitors, bounce rate, traffic source, etc.
Advertisement
Advertisement cookies are used to provide visitors with relevant ads and marketing campaigns. These cookies track visitors across websites and collect information to provide customized ads.
Others
Other uncategorized cookies are those that are being analyzed and have not been classified into a category as yet.
Opslaan en accepteren