Collages are often seen as a twentieth-century invention, created by no less a person than Pablo Picasso, for example. Artists discovered the magic of this art form around a quarter-century ago. Collages are made when you create something new out of different images. This autumn the Stedelijk Museum Schiedam presents Magic Collages, a comprehensive overview with work of  Belgian artists such as Jan Fabre and Luc Tuymans, who enjoy great fame worldwide. It is the first time that a Dutch museum pays attention to collages on such a generous scale.

The work has been collected by Geert Verbeke and Carla Lens, who put it into their private Stichting de Verbeke Foundation in Kemzeke, Flanders. It is the most complete and representative collection of collages worldwide. It is also the first time that the collectors show so many works outside Belgium, some of which have been on show in prestigious places like the Centre Pompidou and the Louvre in Paris.

The collectors are primarily led by their intuition when it comes to buying new work. Humour, inventiveness and the process of creation are the main determinants. This can be seen, for example, in the work of Marcel-Louis Baugniet, an important Belgian collage artist.

He places the head of Salvador Dalí with the upward-curling moustache and piercing eyes on top of the body of a bird. His collage evokes the look and feel of the surrealistic work of Dalí. It is as if you are looking at a theatrical work by the Spanish master himself.

With typical Belgian self-mockery some artists ridicule their homeland. Galgenius, for instance, applies a bow in the colours of the Belgium flag above the text ‘s Lands Glorie’ (‘Glory of the Land’). Two chips are sticking out of the bow. 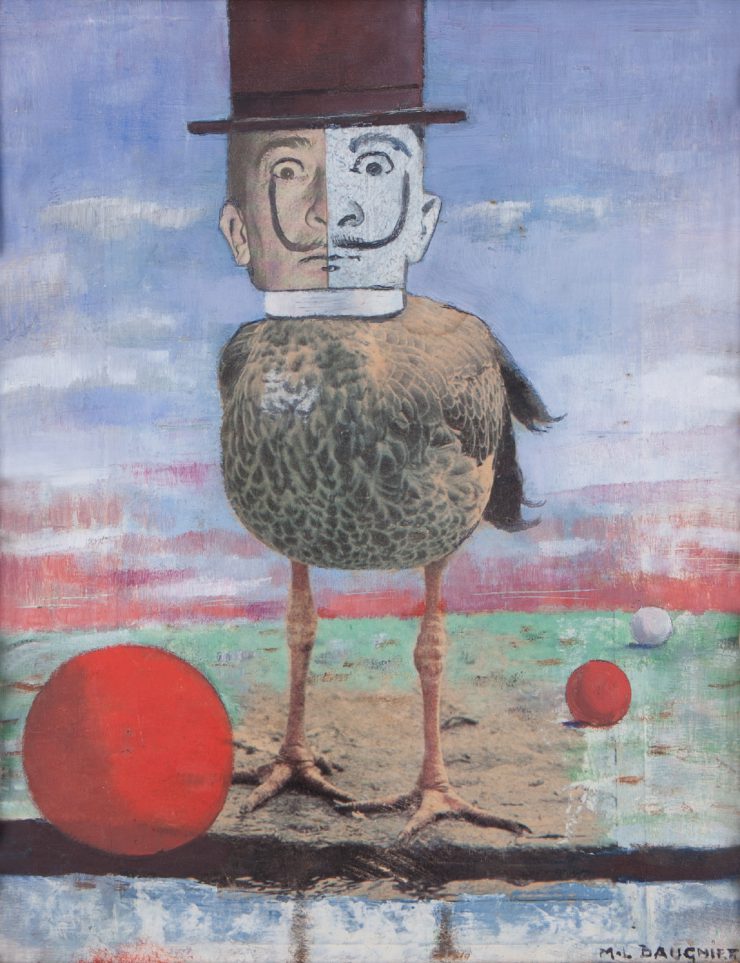 Beneath it hangs a coin with the logo of the legendary cigarette brand Belga. ‘In every collage there is always a flavour of rebellion’, it says in the bulky catalogue of the Verbeke Foundation. And: ‘Everything that makes you look at reality from a different angle is allowed in a collage.’

Among the many works from the Verbeke Foundation in this Museum, some illustrate the influence of Dada and the Surrealism from the twenties and thirties, but there are also works from the fifties, sixties and seventies, the heyday of collages. Paul Joostens introduced the collage in Belgium in 1916 and liked to call himself a pre-dadaist. You can tell the influence of cubism, futurism and dadaism in his works. However, these movements did not have a monopoly on the collage. The next generation of abstract artists likewise made grateful use of it.

Most collages consist of cut or torn photos, mostly from magazines. Like a true surgeon the artist fillets the various sheets of paper which are then carefully cut and arranged. The word ‘collage’ refers to the French verb ‘coller’ meaning   to stick or paste. This is more or less the last part of creating a collage. No glue is used, obviously, for the digital collages, which will be exhibited in the exhibition Modest Fashion (21 September 2019 to 9 February 2020).

Usually a collage tells a story, but sometimes it does not. Abstract artists made a kind of poetry without words. Their papiers-collés consist of cut-out shapes of different kinds of paper. What comes to mind here are the untitled works of Walter Leblanc and Jo Belahaut, with geometric shapes in red and blue, and black and white. They created something entirely new from existing elements, as if they were magicians.

Collages and the Stedelijk Museum Schiedam

Art historians see Picasso as the inventor of the collage technique, but people have made collages ever since the Middle Ages. Picasso and Juan Gris were followed by the dadaïsts with Kurt Schwitters and the surrealists. The technique is also used in pop art, Fluxus and mail art. These movements link up with earlier exhibitions in the Stedelijk Museum Schiedam, more recently by Bob Lens, Wim T. Schippers and Gijs Assmann and currently the exhibition Modest Fashion.

The Verbeke Foundation is a private art site of collectors Geert Verbeke and Carla Lens, which opened in 2007. The core of the collection consists of around 4,500 collages and assembly art , especially from the twentieth century. A part of this is on permanent display. In a documentary in Schiedam collector Geert Verbeke tells all about his motivations as an art collector.