During the coronavirus pandemic, many people rediscovered nature and their local landscapes by walking and cycling. The museum also looks to its surroundings for the exhibition Living Landscape. See how artists such as Jan van Goyen, Johan Barthold Jongkind, Jan Sluijters and Charley Toorop depict the landscape in the south Holland Maas delta from the late-16th century to today. These artists paint mills, waterways, and meadow birds – the idyll of the typical Dutch landscape – as well as harbours, wharves, and the increasing industrial urbanisation prominent in this part of the Netherlands. ‘The exhibition is both eye-catching and thought-provoking,’ says museum director Anne de Haij. ‘You see beauty and decay. The Maas delta is water-rich but also the most densely populated area in Europe, and not just today – there’s always been tension between nature and humans here.’ 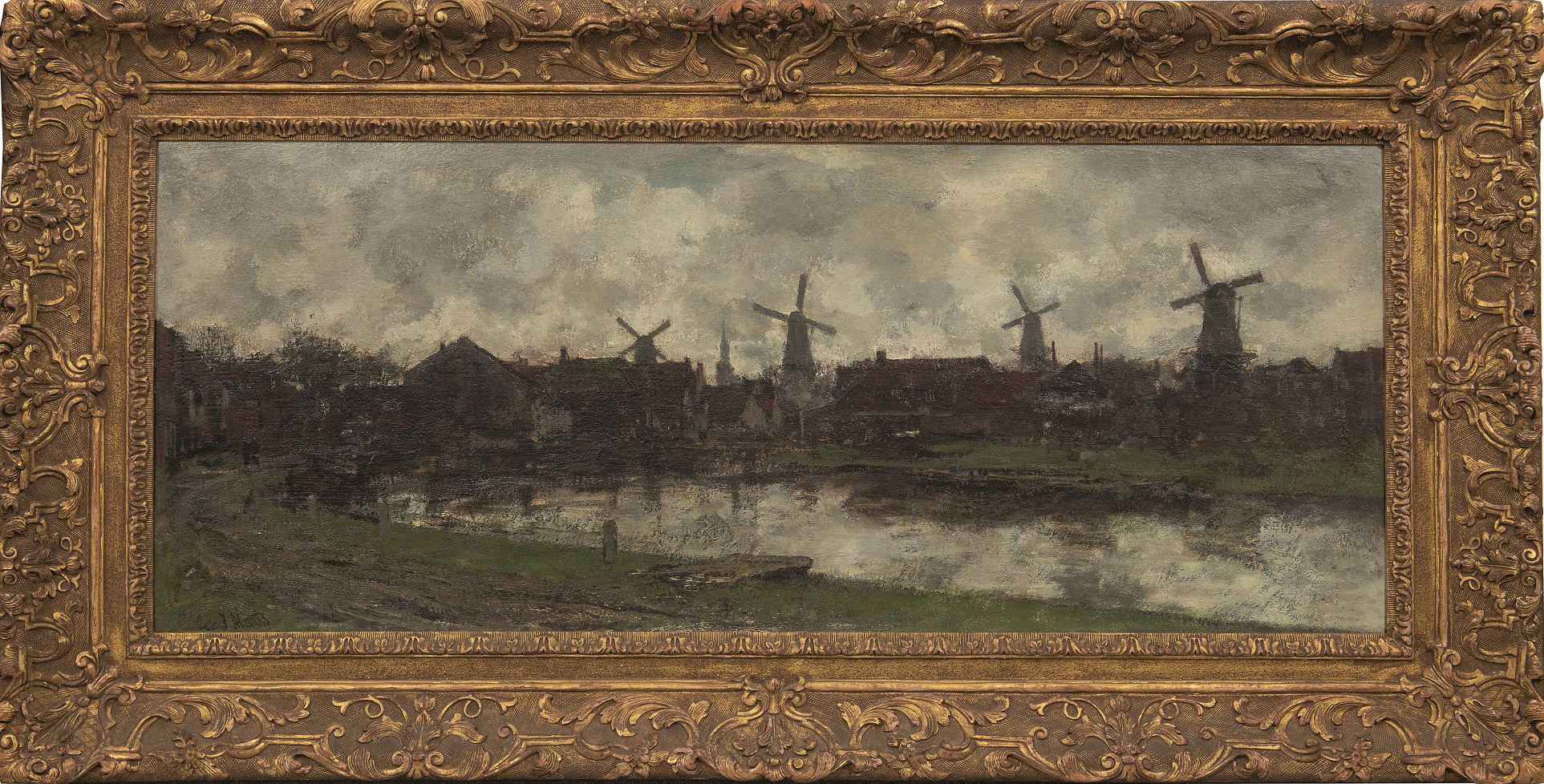 People
The Maas delta runs from Dordrecht to the Hook of Holland with the city of Schiedam right in the middle, as shown in a large triptych by Marius Richters in the exhibition. Over the centuries, the area has attracted artists from the Netherlands and abroad, but hasn’t been the focus of a major exhibition, explains guest curator Rozanne de Bruijne. She adds, ‘The landscape around the Maas river is unique because of all the water, excavation, reclamation, agriculture, construction and industry. You can see the compelling presence of people everywhere.’

Fire
The exhibition spaces follow the themes of Water, Air, Fire and Earth. In Fire, you can see how the riverbanks developed into an industrial landscape around 1900. Paintings show a sky reddened by fire and the immense impact of such fierce flames on the landscape. In other spaces, you can see how artists sometimes cheat the landscape they’re working with, combining elements from different cities or leaving out railways, steamships and telegraph poles.

Brandersbuurt
Fire also has a creative power in lighting, machines and industry, such as in Schiedam’s genever distilleries. Artist Wim Motz recorded the Schiedam Brandersbuurt where workers and distillers’ servants and families lived. Also hanging in this gallery is Lighthouse at night , showing the mouth of the Maas river painted by Charley Toorop in 1915, by which time the coal-fuelled lantern on top of the tower had already disappeared.

Ecosystems
Each gallery also contains contemporary work selected by guest curator Trudi van Zadelhoff. The first gallery focuses on the theme of Water, with a video work by Tone Bjordam on the vulnerability of nature and ecosystems and their sensitivity to changes, particularly those caused by human interventions. This is a collaborative project with musician and professor Marten Scheffer, who was previously awarded the Spinoza Prize for his research on ecosystems.

Crunching ice
In the Water gallery you can also see how artists have painted the river Maas, whether encrusted with drifting ice or lit by the sun. From the 17th to the 19th centuries, the canals and waterways such as the three Schies were important routes for people and goods, creating a network for early forms of public transport.

Moonlight
In the more poetic theme of the exhibition, the Air galleries include paintings of moonlight, clouds and sunsets, including Maannacht bij Overschie (Moonlight at Overschie) by Johan Barthold Jongkind. Winterlandscape near Dordrecht, painted by Jan Van Goyen in 1644, also hangs here. In the wake of the 17th-century masters, the painters of The Hague School in the 19th century moved to the river basin, including Willem Roelofs and Jacob Maris who both liked to visit the Schiedam area.

Breath
See ademtocht #2022 (breath #2022), a work made with plastic bags by Marisca Voskamp. Make your way around and through the installation and feel the cloud ripple as you move. Voskamp filled the bags with the breath of different people to explore, among other things, the vulnerability of life in transparent and fragile materials.

Battle
In the Earth gallery, discover how landscapes changed through peat extraction and building, and how land disappeared and was then reclaimed with the construction of the Maasvlakte. In the stairwell, a video by artist duo Bik Van der Pol shows the construction of Maasvlakte 2, showing the grand project and its endless battle between land and water that the Netherlands has been waging for centuries.

Castle
In this gallery, you’ll also encounter the 17th-century painting of Riviere House, built in 1262 on marshy countryside. The castle was originally just outside Schiedam, and until around 1900 you could still see meadows from this spot. Now the ruin lies wedged between the theatre and the council offices in central Schiedam, an example of the relationship between town and countryside that changed so much in the 20th century.

This website uses cookies to improve your experience while you navigate through the website. Out of these, the cookies that are categorized as necessary are stored on your browser as they are essential for the working of basic functionalities of the website. We also use third-party cookies that help us analyze and understand how you use this website. These cookies will be stored in your browser only with your consent. You also have the option to opt-out of these cookies. But opting out of some of these cookies may affect your browsing experience.
Necessary Altijd ingeschakeld
Necessary cookies are absolutely essential for the website to function properly. These cookies ensure basic functionalities and security features of the website, anonymously.
Functional
Functional cookies help to perform certain functionalities like sharing the content of the website on social media platforms, collect feedbacks, and other third-party features.
Performance
Performance cookies are used to understand and analyze the key performance indexes of the website which helps in delivering a better user experience for the visitors.
Analytics
Analytical cookies are used to understand how visitors interact with the website. These cookies help provide information on metrics the number of visitors, bounce rate, traffic source, etc.
Advertisement
Advertisement cookies are used to provide visitors with relevant ads and marketing campaigns. These cookies track visitors across websites and collect information to provide customized ads.
Others
Other uncategorized cookies are those that are being analyzed and have not been classified into a category as yet.
Opslaan en accepteren