Fun fair flirt, the donkey and other matters*

Erik Mattijssen draws his inspiration from things around him. A pack of LU cookies in a shop in Paris or a bottle of jenever in Schiedam, for example. But just as well a pile of plastic buckets in Calcutta. The artist loves to create work in which people can wander around, as is shown in the solo exhibition Fun fair flirt, the donkey and other things in the Stedelijk Museum Schiedam. Mattijssen (1957) shows works from the past 25 years.

Early works from 1995 are displayed, but also more recent work such as his installation of 7.5 by 3 metres high, fresh from the studio. The latter work is part of the exhibition In the Hoogstraat, elsewhere in the Museum. It is a collage of elements that he saw in the street where the Museum is located. ‘It’s a choice; there’s much more, but I wanted there to be a lot to experience, to cheer you up.’ Mattijssen’s work has been incorporated into the NOG Collection that is administered by the Museum.

The title refers to two works of Mattijssen that are very precious to him. Fun fair flirt was created shortly after the turn of the millennium. He found a book about Flemish folklore and got inspired. Mattijssen drew the donkey, his favourite animal, after a long stay in Ireland. In his work Donkey’s Years (2006) he hung separate parts of the work on lengths of string in front of the pastel drawing for the first time.

Growth is part of a larger series in which Mattijssen depicts budding green, cuttings and flowers in pots or tins in which they are not supposed to be.

He found the inspiration for this work in Surinam. There he noticed that people’s gardens were full of tins filled with all kinds of flowers and vegetables. ‘The combinations were very attractive; marigolds in a tomato sauce bucket, an eggplant plant in an oilcan.’

Last year, the artist was staying in a studio in Paris for artists of the Mondriaan Fund. 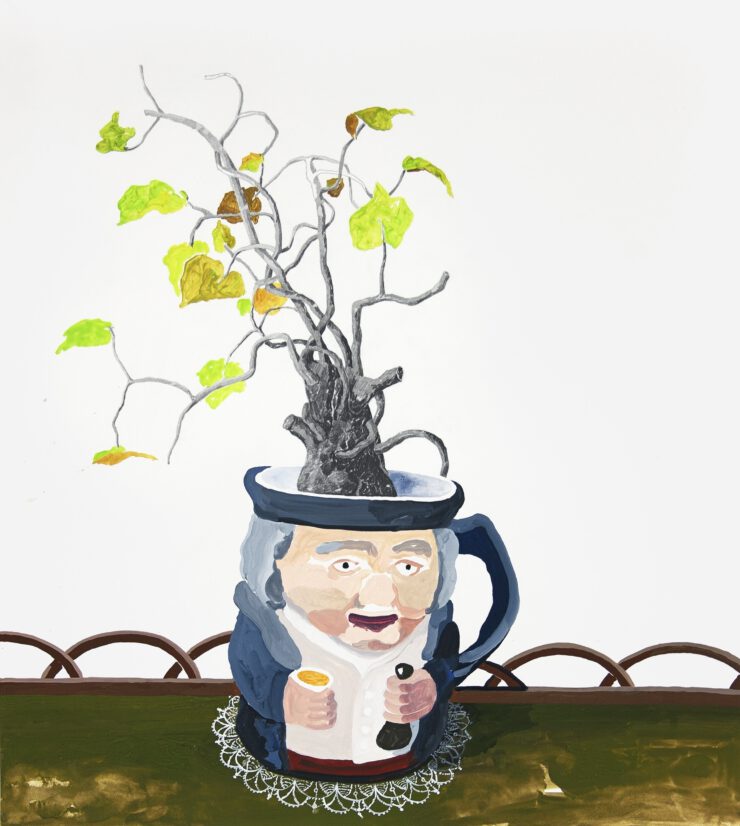 Mattijssen: ‘When I was there I discovered a small grocery around the corner, like you don’t see them a lot anymore. I found all kinds of pots, tins, and herbs from all over the world gathered together. I decided to paint that shop. At the end of the day it became a huge collection under the name Izrael, l’épicerie du monde.’ The work is on display in the Museum.

Erik Mattijssen likes to stay in the countrysides of Spain and Ireland or the colourful cities of India. He zooms in on details that show how people can survive in many different ways. ‘Those inspire me the most. How objects are cherished, arranged and sold, it is different everywhere. I have developed an eye for it over the years. I take photos whenever I can.’ The thousands of images he made and saved are used later to style and compose his works.

Once you are working on something for a long time, you discover more and more patterns, domains and affinities. These are then evolving  into themes, Mattijssen says. ‘I love the ordinary, the things that are easily ignored. This is also why I love to be in countries and places where human inventiveness and creativity are necessary to survive and get something out of life.’ This is in line with the approach of  the Stedelijk Museum Schiedam, which administers the NOG Collection. It focuses attention on people and their interconnections. The Museum won the 2019 Museum Award of the BankGiro Lottery in the category ‘Most public-friendly museum’ of the Netherlands.

The exhibition is accompanied by a publication of the works, with a short text about Mattijssen’s work. It is an edition of the Stedelijk Museum Schiedam in cooperation with the NOG Collection and is available in the Museum shop.